The excitement was building in Derry and Strabane as it was announced this morning that the Clipper Round the World Yacht Race fleet will arrive in the City a day ahead of schedule, with the first yacht due to sail up the Foyle at 10:30am on Wednesday morning, July 13th.

Derry man Gerard Doherty and eight other non-professional sailors from Ireland and Northern Ireland are among the eleven teams who have taken on the challenge of a lifetime, battling the most challenging conditions in a 40,000 nautical mile (nm) race for glory across the globe.
This year marks the tenth year of partnership between the Clipper Race and the city, and the fifth time the event’s fleet will be a key feature of the internationally renowned Foyle Maritime Festival, which is expected to draw tens of thousands of people to the City from July 20-24.
Looking ahead to the first arrivals on Wednesday, Mayor of Derry City and Strabane District Council, Councillor Sandra Duffy, said: “There’s a real sense of anticipation building ahead of the Clipper Race arrivals which have now been confirmed for Wednesday morning and throughout the day. The first sign of the yachts as they make their way up the Foyle generates a huge buzz and the crew can expect a tremendous reception when they step on to the Quayside. “The fact that so many of the fleet are arriving in such a short space of time will really add to the excitement and I know we’re all looking forward in particular to welcoming our own crew member Gerard Doherty home after his epic adventure. I hope to see lots of people turning out to give Gerard and all the Clipper crew a very warm Derry welcome.” 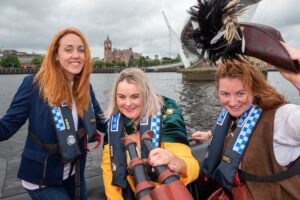 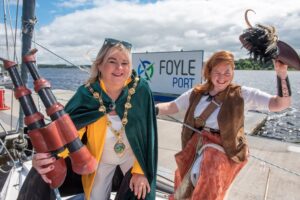 Mayor of Derry City & Strabane District Council, Sandra Duffy at the Clipper Launch
Several of the Irish crew are sailing on board the Ha Long Bay, Vietnam entry, including Gerard, who is sailing over 15,000nm on Legs 6, 7 and 8 of the race. This is the penultimate race of its circuit, dubbed The LegenDerry Finale, and the stopover in Derry is famous among the Clipper Race crew for the LegenDerry welcome that follows the arduous journey from New York.
Speaking just before his journey home, Gerard said: “Doing the Clipper Race has made me appreciate everything I have in my life. Being at sea has been the longest I have been away from my family and two daughters. “Derry is such a good stopover because each time, the people of Derry reach out and welcome the Clipper Race with an open heart, making everyone in the race feel welcome in the city. Derry makes an amazing effort to accommodate the crew, and when we arrive in Derry the Mayor will be there, bands will be there and thousands of people will be there to welcome us. I will be immensely proud to sail up the Foyle, it will be an outstanding day for me.”

You can find out all about the arrivals with regular ETA updates on both the Foyle Maritime Festival and the Clipper Round the World Yacht Race website and social media pages.

The Foyle Maritime Festival is led by Derry City and Strabane District Council with support from Tourism NI, Foyle Port, the Loughs Agency and Diageo.

You can find out more about all the activities taking place throughout the festival at foylemaritime.com