The Atlantic Technological University (Ollscoil Teichneolaíochta an Atlantaigh) was launched by the Minister for Further and Higher Education, Research, Innovation and Science, Simon Harris TD.

Speaking at a landmark event at ATU Sligo and live-streamed to campuses in Galway, Mayo and Donegal, Minister Harris told a large gathering of students, staff and dignitaries — including ATU President Dr Orla Flynn and ATU Chair Maura McNally — that the new Technological University would play a pivotal role in the strategic regional development of the west and north-west.

Minister Harris called the launch a landmark day and said that the new ATU would become a ‘powerhouse’ in the region.

The formation of ATU creates university campuses in counties Donegal, Sligo, and Mayo for the first time while giving Galway city a second university option.

ATU will serve 21,000 students and be one of the largest multi-campus universities in Ireland with 8 campuses, research centres and iHubs. The university will be supported by 2,250 staff, delivering practice-oriented study and research.

Some 600-plus higher education programmes will be available at all levels of the National Framework of Qualifications from apprenticeships to doctoral level qualifications.

Its position on the edge of Europe makes it the perfect gateway to the rest of the world. 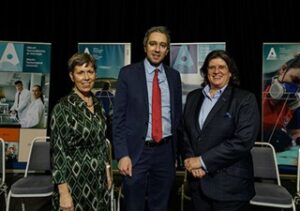 “The establishment of Atlantic Technological University, the fourth TU in the State, is a significant occasion for higher education in Ireland and, in particular, for the West and North West regions.

“Today is the start of a new journey. Together these institutions will merge to become ATU – a powerhouse working for the region, for investment in the region and its people.”

The announcement marks a momentous day for Donegal as the ATU becomes the first university in the history of the county.